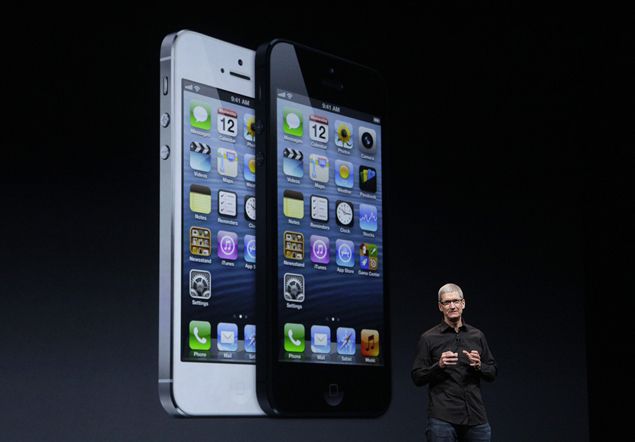 Based on Apple’s press conference on September 12, their strategy can be described as: change customer behavior now, encourage an upgrade later.

The Apple wallet going to be called, imaginatively, “Apple Wallet.” It works without an NFC chip, relying instead on geolocation to determine if an iPhone user is in the proximity of a compatible terminal. Geolocation is clearly not permanent solution because it includes obvious problems, such as: unwanted notifications (if you ever want to be notified that you can use your Starbucks card, for example, you’ll be notified whenever you can possibly use your Starbucks card, whether you want to or not), and imperfect functionality indoors (when you are in a shopping mall, GPS has a hard time figuring out exactly where you are).

So if geolocation is not the ideal permanent solution, why did Apple exclude NFC from the iPhone 5?

1) Leverage available products, and other people’s money (OPM). There are no iPhone apps in the Apple App Store that support NFC, which makes sense since there has never been an iPhone that supports NFC. By contrast, there are dozens of applications that support QR codes and bar codes. Any iPhone app that displays a QR code for the purpose of being scanned by a terminal is a candidate for Passbook. The beauty of this model is that some company other than Apple has already paid to develop the QR/bar code processing, paid for training employees, and paid for scanning equipment needed at point-of-sale. With all of this third-party investment in place, a company that wants to put their ticket/coupon/card into Passbook simply needs to load their information into the Passbook template. From there, it can take advantage of the key Passbook feature: opening from a locked screen.

2) Locked–screen access. Passbook opens from a locked screen. No third-party app can do that. Because Apple writes Passbook, it is integrated with the OS, which allows the app to open directly from a locked iPhone screen, straight to the scan-able code, which is a considerable advantage because it saves the user 2 to 4 steps per transaction. This is a strong competitive advantage over any app provider and a reason to get Passbook in the marketplace sooner than later.

3) The hardware and the battery: We know NFC technology takes up physical space within the phone, and uses power from the battery. Judging by the previous two points in this article, Apple is choosing to take advantage of systems and technology have already been deployed. By not including an NFC chip in the iPhone 5, Apple has time to figure out if it really wants to include an NFC chip in the next version of the iPhone, or possibly the version after that. If they choose to include NFC in a future version, they will have time to figure out where to squeeze in the NFC chip within the very crowded chassis of the 18% thinner iPhone 5. Also, Apple is serious about maintaining long battery life between recharges, so they will want to ensure that the NFC chip does not use too much power. For example, consider Apple’s deployment of 4G technologies. 4G has been around for years now, but the iPhone 5 is the first iPhone to include 4G compatibility. Why? According to the press conference this week, Apple wanted to make sure they could maintain a long battery life because 4G uses more power than 3G. So, if Apple was willing to wait over 2 years to get the customer experience right with 4G, it makes sense that they would be willing to wait to get it right with NFC.

4) Big Data Has to Start Somewhere: So why didn’t Apple simply wait for an iPhone with NFC before it deployed Passbook? Understanding customer behavior of the mobile wallet is important to try to understand what each customer is ultimately worth over time. Apple will begin collecting whatever data it can with the sale of the first iPhone; Apple will eventually be able to draw conclusions based on this data. For example, Google Wallet has been in the market since in September 2011. Google appears to be making major decisions already (the move to the cloud and the elimination of the prepaid card), which are based in part on the full year of market data it has accumulated. Compare that to Isis, which has no data to analyze yet, and according to Bloomberg, we won’t know the new timeline until October. Apple was smart to start collecting mobile wallet data by launching Passbook now.

5) Buying a new iPhone is good for Apple: Many thought Apple would include NFC hardware in the iPhone 5 to allow for the option of a Passbook upgrading to NFC without requiring the user to buy a new iPhone. But, since the iPhone 5 does not include an NFC chip, the customer is out of luck if Passbook evolves to support NFC in the future. Apple is unlikely to support a third-party micro-ST solution or a SIM card solution to NFC because Apple likes to control all of the hardware that is directly involved with its OS. So, buying a new iPhone will be necessary to support NFC. And, that is good for Apple. According to Apple’s 10–K report released in late October last year, iPhone sales accounted for 43% of revenue. So, creating an incentive for customers to buy another phone is a good thing to Apple. Even if all of the iPhone 5 buyers need to upgrade their phones in 2 years to take advantage of NFC, that fits into the average time it takes for an American user to upgrade their phone–which is about 22 months. So, an upgrade in 2 years is unlikely to raise too much customer ire.

Despite advocates on both sides of the NFC question, Apple’s decision appears to be made based on logic and future revenue. As soon as Apple considers NFC as an indispensable addition to iPhone sales, Apple will begin designing NFC into the next iPhone.